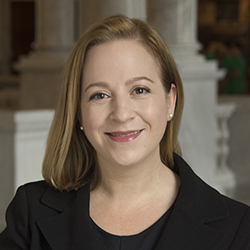 In her position, Rowland oversees PIE as it provides authoritative information about the copyright law to the public and establishes educational programs. PIE publishes the copyright law and other provisions of Title 17; maintains a robust and accurate public website; creates and distributes a variety of circulars, information sheets, and newsletters, including NewsNet; responds to public inquiries regarding provisions of the law, explains registration policies, procedures, and other copyright-related topics upon request; plans and executes a variety of educational activities; and engages in outreach with various copyright community stakeholders.

Rowland joined the Office in 2010 as attorney-advisor for the Office of the General Counsel. From 2012 to 2015, she served as senior counsel for policy and international affairs. In February 2015, Rowland was appointed senior advisor to the United States Register of Copyrights. In that position, she assisted the Register on a full range of policy, legal, and governance issues relating to the United States Copyright Office and its agency responsibilities. Her duties have included a wide range of statutory and regulatory functions, including assisting with policy studies and rulemakings, representing the United States as a member of intergovernmental delegations at trade negotiations, and co-chairing public hearings.

Before joining the Office, she spent several years in private law practice in Washington, DC, where she represented a variety of companies in intellectual property matters. Rowland began her legal career as a law clerk for the Hon. N. Carlton Tilley Jr. of the U.S. District Court for the Middle District of North Carolina.

Rowland earned her JD from William and Mary Law School, where she was elected to the Order of the Coif. She earned her BA in political science from American University.

Copyright functions were first centralized within the Library of Congress in 1870 and, in 1897, Congress created the position of Register of Copyrights. The Register of Copyrights serves by appointment of, and under the general direction of, the Librarian of Congress. Congress enacted the first federal Copyright Act in 1790 in accordance with Article 1, section 8 of the United States Constitution, “to promote the progress of science and useful arts, by securing for limited times to authors and inventors the exclusive right to their respective writings and discoveries.”