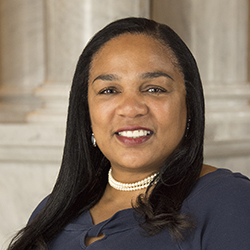 As senior advisor for organizational policy and special projects, Moss is working on several major projects, including historical records digitization, IT modernization, and development of the Copyright Modernization Office. She serves as a liaison for the Acting Register, keeping her apprised of the successes of the projects and of any issues or concerns.

Moss began her Library career in 2000 at the National Library Service for the Blind and Physically Handicapped (NLS) as the assistant head of production control. She was promoted to digital projects coordinator of a four-year multi-million dollar project to transition the NLS program from analog to digital. She also previously served as the NLS financial manager for two years.

Most recently, she served as special assistant to the director of the National Programs directorate in the National and International Outreach (NIO) division of the Library. There she assisted in directing phases of program operations, administration, budgeting, and contracting. She also served as COR, operations fund manager, and a project manager for the National Book Festival from 2015 to 2017.

Prior to joining the Library, Moss worked for Dow Jones & Company as circulation manager. She was responsible for marketing, transportation, distribution, and circulation for the entire state of Virginia.

Moss earned her BA in political science with a concentration in mathematics from Wellesley College and her MBA from the University of Maryland University College. She also is a certified Level III contracting officer’s representative.

Copyright functions were first centralized within the Library of Congress in 1870 and, in 1897, Congress created the position of Register of Copyrights. The Register of Copyrights serves by appointment of, and under the general direction of, the Librarian of Congress. Congress enacted the first federal Copyright Act in 1790 in accordance with Article 1, section 8 of the United States Constitution, “to promote the progress of science and useful arts, by securing for limited times to authors and inventors the exclusive right to their respective writings and discoveries.”