Best Practices in Fair Use: From Theory to Project 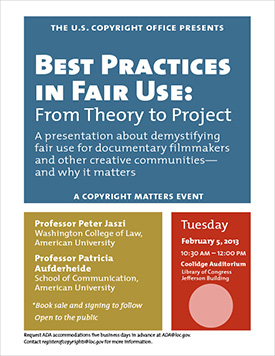 The U.S. Copyright Office hosted a Copyright Matters program on February 5 at 10:30 a.m. in the Coolidge Auditorium of the Library of Congress. Professors Peter Jaszi and Patricia Aufderheide, both of American University, presented "Best Practices in Fair Use: From Theory to Project: A Presentation on Demystifying Fair Use for Documentary Filmmakers and Other Creative Communitiesand Why it Matters."

Jaszi and Aufderheide are co-authors of Reclaiming Fair Use: How to Put Balance Back in Copyright. Jaszi teaches copyright law at American University's Washington College of Law and writes about diverse legal topics. Aufderheide teaches communications and is co-director of American University's Center for Social Media. Since 2005, Jaszi and Aufderheide have worked together on a project to document the best practices of creative and academic communities in employing fair use. A book sale and signing followed the discussion. The event was free and open to the public.

Patricia Aufderheide is university professor in the School of Communication at American University in Washington, D.C., and co-director of the Center for Social Media there. She is the co-author with Peter Jaszi of Reclaiming Fair Use: How to Put Balance Back in Copyright (University of Chicago Press, July 2011), and author of, among others, Documentary: A Very Short Introduction (Oxford, 2007), The Daily Planet (University of Minnesota Press, 2000), and of Communications Policy in the Public Interest (Guilford Press, 1999). She heads the Fair Use and Free Speech research project at the Center. She has been a Fulbright and John Simon Guggenheim fellow and has served as a juror at the Sundance Film Festival among others.

She has received numerous journalism and scholarly awards, including the Preservation and Scholarship award in 2006 from the International Documentary Association, a career achievement award in 2008 from the International Digital Media and Arts Association, and the Woman of Vision Award from Women in Film and Video (DC) in 2010. Aufderheide serves on the board of directors of Kartemquin Films, a leading independent social documentary production company, and on the editorial boards of a variety of publications, including Communication Law and Policy and In These Times newspaper. She has served on the board of directors of the Independent Television Service, which produces innovative television programming for underserved audiences under the umbrella of the Corporation for Public Broadcasting, and on the film advisory board of the National Gallery of Art. She received her Ph.D. in history from the University of Minnesota.

Peter Jaszi teaches copyright law at American University law school. He works on topics ranging from law and the traditional arts of Indonesia to the contemporary doctrine of fair use. His recent publications about the idea of authorship and the culture of intellectual property include "Copyright in Transition" (with Martha Woodmansee, in Volume IV of the History of the Book in America, 2009), and "Is There Such a Thing as Post-Modern Copyright?" (in Making and Unmaking Intellectual Property, 2011, which he edited with Woodmansee and Mario Biagioi).

In 1994, Professor Jaszi served on the Librarian of Congress' Advisory Commission on Copyright Registration and Deposit, and in 1995 he helped organize the Digital Future Coalition. He serves as a trustee of the Copyright Society of the U.S.A. and a member of the editorial board of its journal. Since 2005, he has been working with Patricia Aufderheide of the American University School of Communications on a project to document the best practices of various creative and academic communities in employing fair use. Professors Aufderheide and Jaszi have described that work in Reclaiming Fair Use, recently published by the University of Chicago Press. Professor Jaszi is part of the legal team representing the National Federation of the Blind in the Authors Guild v. HathiTrust litigation. In 2007, the American Library Association gave him its L. Ray Patterson Copyright Award, and in 2009, he was honored as a Champion of Intellectual Property by the IP section of the District of Columbia Bar. In 2011, Public Knowledge recognized him with one of its annual IP3 awards.