Copyright Conversations with the United Kingdom 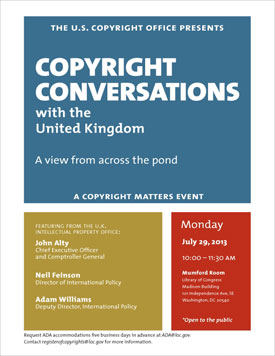 The U.S. Copyright Office presented a Copyright Matters program on July 29, 2013, at 10:00 a.m. Entitled Copyright Conversations with the United Kingdom, the program was held in the Library of Congress Mumford Room, located on the 6th floor of the James Madison Memorial Building, 101 Independence Avenue SE, Washington, D.C.

The program featured John Alty, chief executive officer and comptroller general of the Intellectual Property Office of the United Kingdom as well as Neil Feinson, director of international policy and Adam Williams, deputy director of international policy. In a conversation with Register of Copyrights Maria A. Pallante and senior officials of the U.S. Copyright Office, the panelists discussed current copyright policy issues facing the United Kingdom and the United States, such as orphan works, extended collective licensing, small claims, and recent efforts in both countries to update the copyright legal system for the digital age. The event was free and open to the public.

John Alty has served as chief executive officer and comptroller general of the United Kingdom’s Intellectual Property Office (IPO) since February 15, 2010. He is a Board-level civil servant, having begun his career with the then Department of Trade and Industry in 1978.

Alty has come to the IPO with a strong track record of handling complex and politically sensitive economic, regulatory, and business issues. He is also experienced in working as a partner and sponsor with delivery bodies to deliver better outcomes for customers.

Alty spent several years as director of European policy, and his last appointment was as director general of the Fair Markets Group in the United Kingdom’s Department for Business Innovation and Skills. He has substantial European Union and international expertise.

Alty was awarded the Order of the Bath in the Queen’s Birthday Honours 2010.

After starting out in international banking, Neil Feinson joined the United Kingdom’s Department of Trade and Industry in 1988. In his early career there, he focused on competition, economic regulation, and trade in services. Wider experience included temporary assignments to the European Commission (1992–1994), the Office of Telecommunications Regulation (1994–1995), and the Office of Fair Trading as director of European competition policy (2003–2005).

Feinson returned to the Department as director of strategic planning and then head of the Energy Market Framework, where he worked on energy security and regulatory issues before transferring to the United Kingdom’s Intellectual Property Office in 2011 to serve as director of international policy.

Adam Williams is deputy director of international policy in the United Kingdom's Intellectual Property Office. He has recently assumed this role, having moved from the copyright team within the office.

Williams has previously worked in the UK government on defence policy matters and has extensive experience dealing with policy issues in the European Union, United Nations, and North Atlantic Treaty Organization as well as undertaking bilateral negotiations.

Williams holds a bachelor of sciences degree and a master's degree in business administration.