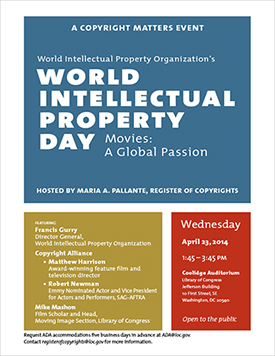 Partnering for the third year with the Copyright Office, the Copyright Alliance presented multi-award winning feature film and television director Matthew Harrison, who discussed the creative process of film making. Harrison's feature film Rhythm Thief was awarded Special Jury Recognition for Directing at the Sundance Film Festival. Harrison was also a recipient of the Mystic Fire Independent Film Award and directed episodes of Sex and the City for HBO.

The Alliance also presented two-time Daytime Emmy Award-nominated actor Robert Newman, who discussed the creative components of films and other audiovisual works. Newman is Vice President for Actors and Performers for the Screen Actors Guild - American Federation of Television and Radio Artists (SAG-AFTRA), which represents more than 165,000 media professionals including actors, stunt performers, and voiceover artists.

Film Scholar Mike Mashon rounded out the program by discussing the historical and cultural importance of movies as well as the art and science of preserving them. Dr. Mashon is Head of the Moving Image Section at the Library of Congress and was previously its Curator of Moving Images.

The program was held in the historic Coolidge Auditorium on Capitol Hill in Washington, D.C., and was free and open to the public.

Francis Gurry was appointed Director General of WIPO on October 1, 2008.

He began his WIPO career in 1985, initially in the Development Cooperation and External Relations Bureau for Asia and the Pacific. He was instrumental in establishing the WIPO Arbitration and Mediation Center in 1994 and subsequently in developing the highly successful Uniform Domain Name Dispute Resolution Policy.

He served on the WIPO top management team from 1997, initially as Assistant Director General, then from 2003 as Deputy Director General with responsibility for patents and the PCT system, the Arbitration and Mediation Center, traditional knowledge, traditional cultural expressions and genetic resources.

Matt Harrison's feature film KICKED IN THE HEAD was Executive Produced by Martin Scorsese, released theatrically by Universal and premiered as an official selection at Cannes. His network and cable television directing credits include SEX AND THE CITY for HBO. Matt's feature film RHYTHM THIEF won a JURY PRIZE at the SUNDANCE FILM FESTIVAL.

Matt recently completed his new comedy MY LITTLE HOLLYWOOD and is now preparing his sixth feature film MENTIROSA. He has served on film festival juries around the world including Gijon International Film Festival, AFI Fest and Slamdance Film Festival.

Harrison won a full scholarship at the Cooper Union School of Art where he completed his BFA. He completed post-graduate studies at NYU.

Matt is a Feature Film Director member in good standing with the Directors Guild of America, sponsored by Martin Scorsese and Francis Ford Coppola.

Robert Newman is perhaps best known for his 28 year run as Joshua Lewis on the longest running program in broadcasting history, Guiding Light. The role garnered him 2 Daytime Emmy nominations for Outstanding Lead Actor in a Drama Series. He has recently guest starred on Homeland, Criminal Minds, NCIS and Law and Order:SVU, and will be seen in the upcoming Amazing Spider-Man 2, the Sci-Fi film Dracano, and the short film Deadline.

Off-Broadway Credits include Perfect Crime, She's of a Certain Age and Sessions: the Musical. Regional credits include Gypsy opposite Tovah Feldshuh at BRT; Deathtrap, Peter Pan, Shenandoah, and Man Of La Mancha at the Barn Theatre; Curtains at Paper Mill Playhouse and TUTS; Annie at NCT; Nine at NSMT; and A Little Night Music and The Full Monty at PCLO. Other stage credits include Quiet on the Set, Picnic, Barefoot in the Park, Romantic Comedy, Sylvia (which he also directed), and The Glass Menagerie.

Mike Mashon is Head of the Moving Image Section at the National Audio Visual Conservation Center in Culpeper, Va., and has been with the Library since 1998. A native of Baton Rouge, La., he received his B.S. in Microbiology from Louisiana State University, an M.A. in Radio-Television-Film from the University of Texas at Austin, and a Ph.D. in Radio-Television-Film from the University of Maryland. He has written and presented extensively on issues surrounding media history, preservation, and access.