Copyright Litigation: The Year in Review 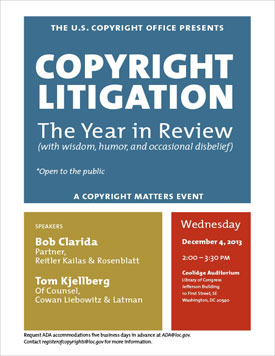 The U.S. Copyright Office presented a Copyright Matters program on Wednesday, December 4, 2013 at 2:00 p.m. Entitled Copyright Litigation: The Year in Review, the program was held in the historic Coolidge Auditorium in the Jefferson Building of the Library of Congress, 10 First Street, SE, Washington, DC.

The program featured noted copyright lawyers Bob Clarida of Reitler Kailas & Rosenblatt and Tom Kjellberg of Cowan Liebowitz & Latman who discussed the past year’s most notable copyright cases, drawing on their well-known gifts of wisdom, humor and occasional disbelief. This program is a major highlight at the annual meeting of the Copyright Society of the U.S.A. each year, and the Office was delighted to welcome them to Washington. The event was free and open to the public.

Robert W. Clarida, a partner at the New York firm of Reitler Kailas & Rosenblatt LLC, is widely recognized for his intellectual property expertise, having received professional peer recognition for the field of intellectual property in Chambers USA (2010), "New York Superlawyers" (2006, 2007, 2008, 2009, 2010, 2011, 2012), American Lawyer's "Best Lawyers in the U.S."(2006, 2007, 2008, 2009, 2010, 2011, 2012) and for the field of copyright in Legal 500 (2007). He advises clients in a wide range of industries including music, software, film, photography and new media. He has also litigated a number of high-profile copyright matters and argued significant federal appeals in several Circuits. He is admitted to the New York bar, and to the federal bars of the Southern, Eastern, Northern and Western Districts of New York, the Eastern District of Michigan, and to the U.S. Courts of Appeals for the First, Second, Seventh and Ninth Circuits.

Clarida speaks and writes frequently on copyright issues, and is the principal author of the annual review of copyright decisions published each year by the Journal of the Copyright Society of the USA. He co-authors the regular copyright law column in the New York Law Journal, teaches a seminar on emerging intellectual property issues at Columbia Law School, is a past member of the AIPLA Board of Directors, the past chair of the Copyright and Literary Property Law Committee of the Association of the Bar of the City of New York, a past Trustee of the Copyright Society of the USA, and has served as an expert reviewer for the Multistate Bar Exam in the intellectual property area.

He earned his J.D. in 1993 from Columbia University, where he was a Harlan Fiske Stone scholar, after earning a Ph.D. in music composition from SUNY Stony Brook in 1987, and receiving a Fulbright fellowship to the Musicology Institute of Gothenburg University, Sweden.

Kjellberg practices in the areas of copyright, trademarks and right of publicity, including counseling and litigation for clients in a wide variety of industries including publishing, film, music and software. He speaks and writes regularly on copyright, and is co-author, with Bob Clarida, of the annual review of copyright decisions published each year in the Journal of the Copyright Society of the USA, and delivered at the Copyright Society's annual meeting. Kjellberg is a past Trustee of the Society. He is an Adjunct Assistant Professor at New York University's School of Continuing and Professional Studies, where he teaches Copyright Law, and has also taught an intellectual property course in Fordham University's Department of Media Studies.