In Memory of Marybeth Peters, Eleventh Register of Copyrights 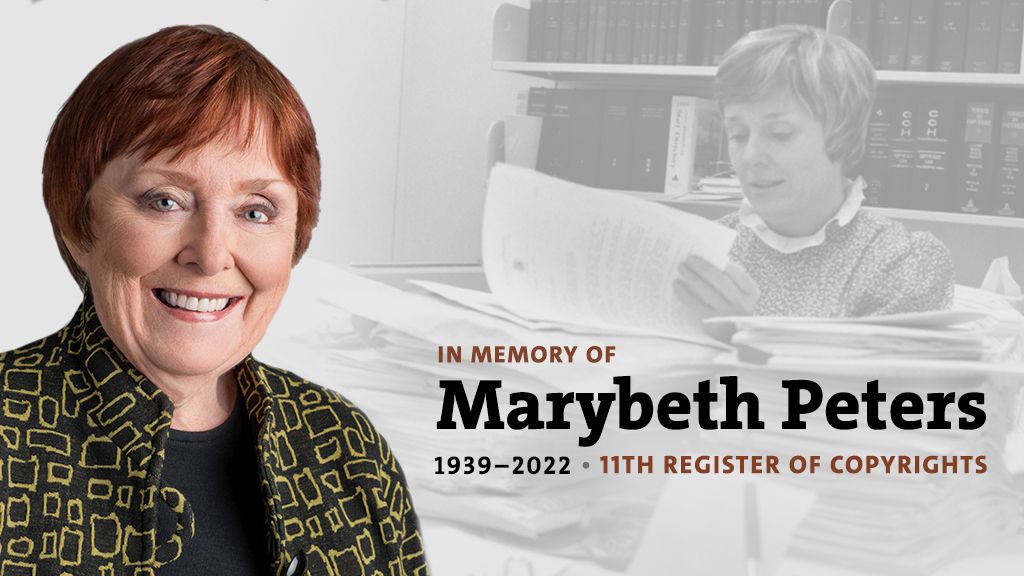 On September 29, 2022, the copyright community lost a friend, advocate, and scholar when Marybeth Peters passed away peacefully in her sleep at the age of 83. Having served the Copyright Office for more than four decades in numerous capacities, including as the Office’s head, she was a global authority on copyright law and a well-known and well-loved presence in the world of copyright.

Her passing marks the loss of an influential force in the development of copyright law and an unparalleled source of expertise. Throughout her long tenure as the Register of Copyrights, Peters was sought after by Congress, as well as by scholars and copyright industries, for her vision and analysis.

“Marybeth Peters leaves an unparalleled legacy as a champion for creativity and an inspiring leader,” said Register of Copyrights Shira Perlmutter. “Her broad and deep knowledge of copyright was matched only by her warmth and generosity in sharing it with all of us.”

Peters, who was born in 1939, was a native of East Providence, Rhode Island, and earned her bachelor’s degree at Rhode Island College in 1961. She received a law degree from the George Washington University Law School in 1971.

In 1977, Peters was promoted to chief of the Information and Reference Division and was later appointed chief of the Examining Division in 1980. She served as advisor to the Register on policy planning starting in 1983 and, in 1993, added the position of acting general counsel to her portfolio. During this period, she also served as a consultant on copyright law to the World Intellectual Property Organization and earned a reputation as a leading expert on U.S. and international copyright law.

On August 7, 1994, Peters took office as the eleventh Register of Copyrights, the first woman after Barbara Ringer to serve in that role.

Her expertise and advice were critical to the drafting and passage of several amendments to the Copyright Act, and her leadership was instrumental in the implementation of several statutes, such as the Uruguay Round Agreements Act, the Digital Performance Right in Sound Recordings Act, the Sonny Bono Copyright Term Extension Act, and the Digital Millennium Copyright Act (DMCA), which brought the U.S. copyright system into the internet age. At the request of Congress, she submitted several major reports on copyright policy issues, many of which led to the introduction of legislation. She also advised Congress on all copyright legislation that was enacted during her tenure as Register and testified at many hearings on copyright policy and legislation.

Peters was the first Register to oversee the Copyright Office’s new role under section 1201 of the DMCA in creating exemptions from the anti-circumvention law. Her leadership of the Office also included the generation of several landmark studies, such as those on statutory licenses, protection of databases, and addressing the orphan works problem. She also was largely responsible for the monumental development of the first electronic registration system. “This will be my legacy,” Peters once noted.

In recognition of the growing importance of international copyright issues, she established the Office of Policy and International Affairs led by an Associate Register of Copyrights, which has played an active role assisting in the representation of the United States at the World Intellectual Property Organization, the World Trade Organization, in bilateral and multilateral trade negotiations, and in other international forums.

Peters retired from the Office in 2010 after serving as Register of Copyrights for sixteen years. She had a longer tenure than any other Register, except for the first Register, Thorvald Solberg.

After her retirement, Peters served as senior counsel at the law firms of Oblon, Spivak, McClelland, Maier & Neustadt, LLP and Muncy, Geissler, Olds & Lowe, PC. She also served on the board of directors of the Copyright Clearance Center.

Throughout her career, Peters was sought after as a speaker on copyright law and as a lecturer and adjunct professor at law schools, including the Catholic University of America, Georgetown University, and the University of Miami.

Peters was recognized with numerous awards from intellectual property organizations, bar associations, and creative industry associations across the country.