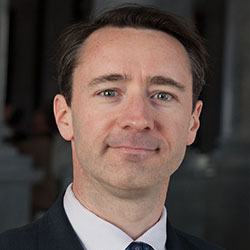 Erik Bertin is deputy director for Registration Policy and Practice for the United States Copyright Office. He was appointed to the position effective April 6, 2015.

Bertin assists the Associate Register of Copyrights and director of registration policy and practice on a full range of legal, policy, and governance issues involving the Copyright Office and its administrative responsibilities.

Bertin joined the Office in 2011 as an attorney-advisor in the Office of Policy and International Affairs, and he served as an assistant general counsel from 2013 to 2015. Before joining the Office, he worked in private practice for 15 years in Washington, DC, where he represented a wide range of clients in intellectual property matters.

Bertin earned his JD from the University of Pennsylvania Law School, where he was an articles editor for the law review. He earned a BA in English from The Johns Hopkins University.

Congress created the Copyright Office in 1897 as a separate department of the Library of Congress. The Register of Copyrights serves by appointment of, and under the general direction of, the Librarian of Congress. Congress enacted the first federal Copyright Act in 1790 in accordance with Article 1, section 8 of the United States Constitution, “to promote the progress of science and useful arts, by securing for limited times to authors and inventors the exclusive right to their respective writings and discoveries.”