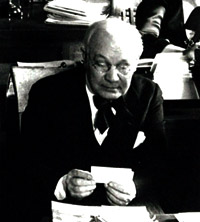 Richard Crosby De Wolf, Assistant Register of Copyrights, became Acting Register of Copyrights on January 1, 1944, upon Colonel Bouvé’s retirement. De Wolf was born in Des Moines, Iowa, in 1875. He studied for two years at Massachusetts Institute of Technology, leaving in 1898 to serve in the U.S. Marines during the Spanish-American War. After the war, he worked in Asia and in the Philippines. From 1904 to 1907, he wrote book, drama, and music notices and reviews for the Boston Transcript. He continued to contribute items to literary magazines from time to time throughout his life and was a writer whose style was especially attractive, elegant, and notable for its particular sparkle and grace.


He was recalled to the Copyright Office in 1923 as a legal advisor, served as Assistant Register from 1934 to 1937, and then again served as legal advisor until he retired in 1941. In 1942, he was again recalled and returned, despite ill health, to assume once more the position of Assistant Register. He served as Acting Register from 1944 to 1945. De Wolf was replaced as Acting Register by the newly appointed Register, Sam Bass Warner, on February 1, 1945. De Wolf stayed on as a special consultant until May 31, 1945. He died at St. Augustine, Florida, on March 8, 1947.


De Wolf conducted what was certainly one of the first college courses in copyright law, indeed perhaps the first in this country. He taught at the School of Diplomacy, Jurisprudence, and Citizenship of American University in Washington, D.C. The university catalog for 1920 notes that De Wolf was a “Lecturer on the Law of Copyrights” and that his course was entitled “Copyright Laws of the United States, Statutes and Decisions.”


His lectures, expanded for publication, appeared in 1925 as a book entitled An Outline of Copyright, published by John W. Luce and Company of Boston with an introduction by Thorvald Solberg. In this work, he was the first person to put forward the interpretation of the U.S. Constitution according to which the language “The Congress shall have Power . . . To promote the Progress of Science and useful Arts, by securing for limited Times to Authors and Inventors the exclusive Right to their respective Writings and Discoveries” was suggested to be completely disjunctive. In stating this conclusion, De Wolf wrote, “This is an example of the balanced style of composition so much used in the days of the colonial worthies. We have as the objects of promotion, science and useful arts, as the classes of persons whose rights are to be secured, authors and inventors, and as the subjects of protection, their respective writings and discoveries. If we take this phraseology disjunctively, it resolves itself into two separate statements: (1) The progress of science is to be promoted by securing to authors the right to their writings; and (2) The progress of useful arts is to be promoted by securing to inventors the right to their discoveries.”


De Wolf continued, “Lawyers, textbook writers, and even judges sometimes seem to have the impression that the proposition is the other way about—that science is to be promoted through patent protection and useful arts through copyright. But when the Constitution was adopted, the word ‘science’ did not have the specific meaning which it has today—that of natural science. It meant learning in general. And on the other hand, the word ‘art’ was not so closely associated as it now is with the fine arts. One occasionally finds references to the useful arts as being within the scope of copyright protection on account of their having been mentioned in the Constitutional provision referred to. It is doubtful, however, whether the framers of the Constitution had any such idea.”


For example, Justice Holmes in his Supreme Court Opinion in 1903 in the case of Bleistein v. Donaldson Lithographing Co., 188 U.S. 239, clearly seems to have considered that, to be copyrightable, works had to promote the progress of the useful arts, since he stated that the Constitution “does not limit the useful to that which satisfies immediate bodily needs.”


It was not until 1966 that the Supreme Court, in a patent case, Graham v. John Deere Co., 383 U.S. 1, endorsed the disjunctive reading, citing De Wolf’s book. The acceptance of De Wolf ’s view is of enormous practical benefit to authors, since it means that it is only necessary for their works to promote the progress of “science” (that is, knowledge or learning) to be the subject of copyright protection. They need not be “useful,” a standard much harder to attain, as shown by the patent cases. Thus Richard C. De Wolf made indelible markings in the margin of the history of American copyright.