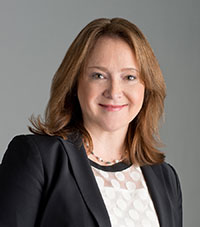 Maria Pallante was Register of Copyrights from June 1, 2011, through October 29, 2016. She directed the administration of important provisions of Title 17, including the nationʼs copyright registration and recordation systems and certain statutory licenses. She and her staff led public discussions in the field of copyright law, acted as principal advisors to the Congress on matters of domestic and international copyright policy, and supported intellectual property efforts across the U.S. government, including appellate litigation, trade negotiations, and treaty implementations.

Prior to her appointment as Register, Pallante held two senior positions in the U.S. Copyright Office: deputy general counsel (2007–2008) and Associate Register and Director of Policy and International Affairs (2008–2010). From 1999 to 2007, she was intellectual property counsel and director of licensing for the worldwide Guggenheim Museums, headquartered in New York. She also served as assistant director of the Authors Guild and executive director of the National Writers Union in New York, in each case working on copyright policy, transactions, litigation, and freedom of expression issues. She practiced briefly with the Washington, DC, law firm and literary agency Lichtman, Trister, Singer and Ross, and she completed a clerkship in administrative law for the appellate division of the U.S. Department of Labor.

Pallante is a 1990 graduate of George Washington University Law School. She earned a bachelor’s degree in history from Misericordia University, which also awarded her an honorary doctorate of humane letters.

Under Pallante’s leadership, the U.S. Copyright Office commenced a two-year process to evaluate complexities in the copyright system and prepare the Office for future challenges. She released Priorities and Special Projects of the United States Copyright Office in October 2011, which identified seventeen priorities in policy and administrative practice and ten special projects for the Office. Using the document as a guide, the Copyright Office engaged with colleagues and customers across the public and private sectors to discuss issues relating to the quality and efficiency of Office services and possible future directions. The public feedback from this effort helped to define the Office’s long-term strategic plans. In December 2015, the Office published a strategic plan for the years 2016 through 2020, Positioning the United States Copyright Office for the Future; in February 2016, it published a Provisional Information Technology Modernization Plan and Cost Analysis.

In March 2013, Pallante helped initiate a comprehensive congressional review of U.S. copyright law through her Horace S. Manges Lecture, The Next Great Copyright Act, presented at Columbia Law School, and subsequent testimony before the House Judiciary Committee. In November 2013, she delivered the Christopher Meyer Memorial Lecture at the George Washington University School of Law, entitled The Next Generation Copyright Office: What it Means and Why it Matters. Other speeches include Review and Reflection: Copyright Hearings and Related Discourse in the Nation’s Capital (February 2014), ASCAP at 100 (February 2014), The Curious Case of Copyright Formalities (April 2013), and Orphan Works and Mass Digitization: Obstacles and Opportunities (April 2012).

Pallante created several new programs to bring additional expertise to the Copyright Office. These included the Barbara A. Ringer Copyright Honors Fellowship, a distinguished public service clerkship for attorneys in the early stages of their careers, and the Abraham L. Kaminstein Scholar in Residence Program, an opportunity for leading academics to work at the Copyright Office on mutually beneficial projects. Her educational initiatives included the Copyright Matters Lecture Series, a community forum in which industry experts discussed the practical implications of copyright law in the twenty-first century, and the Copyright Academy, an internal program to help staff understand complex legal provisions and judicial interpretations. She also created a research program for law schools, in which professors designed courses and projects around timely issues and students received support and direction throughout the semester from Copyright Office experts.